Changing lifestyle, increased calorie intake and reduced physical activity leads to potential risk of unhealthy individuals. Horses are not too different from human with this respect: improved grazing pastures, legume, diet rich in carbohydrates, concentrates (which were not easily available earlier) and reduced physical activity and exercise have increased the risk of various metabolic and hormonal disorders in horses. Out of which most common is EMS (Equine Metabolic syndrome) and Cushing disease. Mostly, these conditions are misinterpreted as similar conditions because of similar clinical signs but they are completely different disorders. 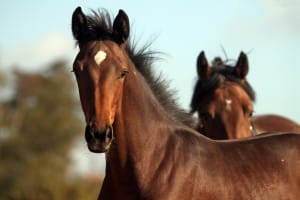 Insulin resistance
In both of these conditions there are increased fat deposits, adipocytes, in various parts of the body eg potbellied abdomen, abnormal fat accumulation on the base of tail, shoulders and neck, increased size of mammary glands in females and fat filled enlarged sheath in geldings. Insulin resistance or reduced insulin sensitivity, a condition where cells fail to respond in the normal way to insulin and are unable to utilize it effectively. This leads to the production of more and more insulin making it more resistant, to more calories in the system which are not getting utilized, which in turn leads to obesity. Increased adipocytes give rise to increased production of adipokinins and inflammatory mediators called cytokinins leading to more and more insulin resistance and low grade inflammation which also leads to unmanageable reoccurring laminar deterioration and laminitis. Although horses are less likely to have diabetes, increased insulin resistance and obesity potentially increases the risk of type 2 diabetes .

Cushing syndrome
In the Cushing syndrome there is a dysfunction of Paras intermediate of the pituitary gland which is responsible for the secretion of numerous hormones. ACTH (adinocortico hormone) is one of the hormones which act on the adrenal glands to produce cortisol. Cortisol, glucocorticoid is a steroid hormone which is synthesized from cholesterol. It regulates the metabolism of glucose and fats, suppresses protein synthesis and regulates inflammatory and immune responses in the body. Dysfunction of the pituitary gland leads to an increase in cortisol which will in turn lead to decreased utilization of glucose causing insulin resistance. Various other clinical signs are wavy abnormal hair growth also called hirsutism, increased water intake, laminitis, increase in urination and decreased immunity leading to skin and respiratory tract infections

Equine metabolic syndrome
On the other hand, Metabolic syndrome is a result of reduced exercise and increase in calorie intake leading to an increase in cortisol levels and high levels of glucose, meaning extra calories. The condition is also referred to as poor metabolism.  This syndrome is mostly seen in middle age horses and has a genetic predisposition for ponies. Ponies genetic make up is to graze pastures for longer distances and they were majorly used for drought purpose as they could perform even with less amounts of pasture.  But now, easily available calories and less physical activity has made them obese resulting in insulin resistance and laminitis.

Diagnosing
The most common test to diagnose Cushing syndrome is the dexamethasone suppression test. In this test, dexamethasone, a steroid, is injected and then blood samples are drawn at regular intervals and compared with the baseline sample. If dexamethasone is utilized properly in the body, its levels will be reduced. Elevated dexamethasone, cortisol levels will indicate Cushing. Other tests are the ACTH stimulation test, determining cortisol levels and glucose levels in urine. Diagnosing insulin resistance by analyzing resting blood insulin concentrations and resting blood glucose concentration after 6 hours of feed deprivation. Another test is combined glucose insulin test. This test is more sensitive than resting blood glucose. Blood samples are analyzed after frequent intervals after glucose and insulin is injected.

Treatment
Treatment may involve medication such as Metformin (glucophage), a successful medicine to lower glucose levels in blood stream . Metformin is majorly used by diabetic patients, as it improves the insulin sensitivity at tissue level. Pergolide is a dopamine agonist. Trilostane will reduce the overproduction of Cortisol levels successfully. Studies have revealed pergolide helps in reducing cortisol levels in horses.

The most important part of the treatment is a proper management of diet and exercise. The feed should not exceed 1.5% of body weight.  Regularly monitor the body condition. A formula for body weight estimation is: weight in pounds is equal to girth in inches multiplied by body length in inches divided by 330. Exercise a horse for at least 20-30 minutes daily with gradual increase. Minimize non-fiber carbohydrates and whole grains, avoid flowering grasses high in sugar. Prefer native to improved pastures, grazing muzzles can also be used to avoid excessive grazing. Also increased calorie restriction can worsen insulin resistance and cause hyperlipemia.

Studies have shown that an increase in Omega 3 supplementation is proven most effective in insulin senstivity. Omega 3 can be effective in reducing inflammation, it stabilizes the immune response and thus can be effective to treat laminitis also.   Other supplements include of zinc, selenium, Vitamin E, vitamin A, proteins and antioxidants also helps in management of laminitis and immunosuppression.